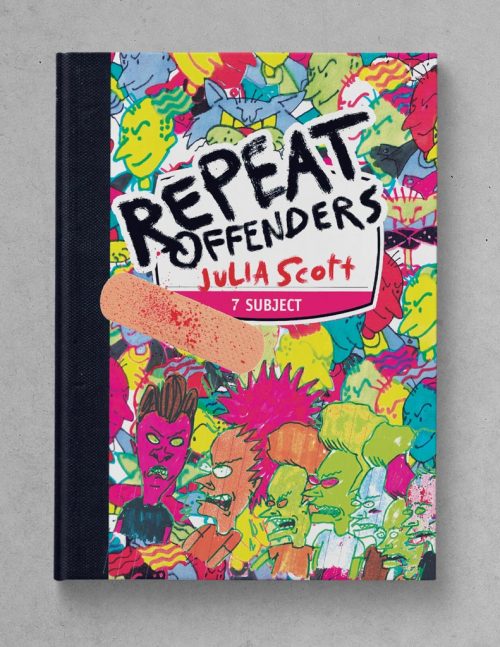 CBA vol 33: REPEAT OFFENDERS is Julia Scott’s solo debut about growing up weird, growing up other, and taking courage from the seemingly innocuous cartoon villains that populated the childhood of a generation.

REPEAT OFFENDERS
Everyone wants to feel connected to something bigger than themselves. When it comes to millennial ennui, however, things get complicated. Living the very American dichotomy of privilege and trouble, more often than not we gravitate towards anti-heroes and villains to break us out of our daily grind. But at what point do the troublemakers of American pop culture start resembling it’s youth more than the heroes? Diary essays paired with familiar faces create a dream landscape mirroring the millennial adolescent psyche.

CBA vol 33: REPEAT OFFENDERS is Julia Scott’s solo debut about growing up weird, growing up other, and taking courage from the seemingly innocuous cartoon villains that populated the childhood of a generation.

Julia Scott is an American working artist based out of the very raucous Baltimore, Maryland. Some of her clients include Warner Bros, Archaia Entertainment, and Lion Forge Comics.  She draws the comic The Telepath Generation with writers Josh Tierney and Bobby Myers, and considers herself an animated pop culture connoisseur.

This website uses cookies to improve your experience while you navigate through the website. Out of these cookies, the cookies that are categorized as necessary are stored on your browser as they are essential for the working of basic functionalities of the website. We also use third-party cookies that help us analyze and understand how you use this website. These cookies will be stored in your browser only with your consent. You also have the option to opt-out of these cookies. But opting out of some of these cookies may have an effect on your browsing experience.
Necessary Alltid aktiverad
Necessary cookies are absolutely essential for the website to function properly. This category only includes cookies that ensures basic functionalities and security features of the website. These cookies do not store any personal information.
Non-necessary
Any cookies that may not be particularly necessary for the website to function and is used specifically to collect user personal data via analytics, ads, other embedded contents are termed as non-necessary cookies. It is mandatory to procure user consent prior to running these cookies on your website.
SPARA OCH ACCEPTERA